Over the last five years the Journal has covered a multitude of subjects supported by pictures that run into thousands; contacts from readers vary from - "where can I get (a variety of apple tree) from, to "please can I have job on your farm" from pickers in Poland, Romania, Bulgaria, Czech Republic etc. etc.'my response is I do not grow apples anymore, just write about them' and send a list of growers with websites for them to contact.

Readers from around the World have made contact; one schoolteacher in America said she uses the website and 'Links' in classes relating to healthy diet. A scientist at East Malling Research told me he followed the English Apple Man from his home in Scotland and it helped enthuse him to come down to Kent and work at the world renowned research station.

Quote; 'As an aside, I remember reading your blog on cold, wet summer(!) days in Edinburgh, thinking about how nice it would be to live and work in Kent… so in some ways you may be partially responsible for Nikki (who I think you've also met) and me making the leap to the South!

I have enjoyed writing the weekly Journal; it takes me to so many interesting places and keeps me in touch with all my many friends in the fruit industry. It also keeps my brain active!

The English Apple Man is not a business, it is a passion.... I earn nothing directly from it, in fact it costs me personally (predominately in petrol) to maintain the site. I hope to keep it going for another 5 years while looking for a protégé ( I am after all now 72) and look forward to improving the weekly Journal with video in the very near future!

Last week, The English Apple Man was one of two Judges for the Gravesend & Rochester Orchard Competition; a very enjoyable day with my fellow judge, Stuart Clark - AGRII Agronomist and our Steward Alex Cooke - Agrovista Agronomist.

This orchard competition is quite different to others, with only two entries per class permitted. The Classes - Dessert Apple; Culinary Apple; Pears.

Understandably the growers enter only the very best orchards, so we were Judging the 'Cream of the Crop' and the quality of the entries very high and competition scores very, very close! 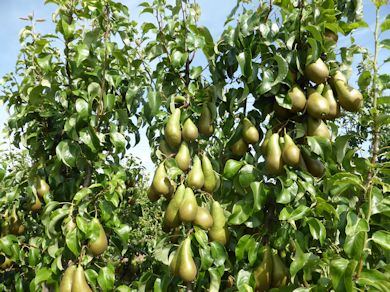 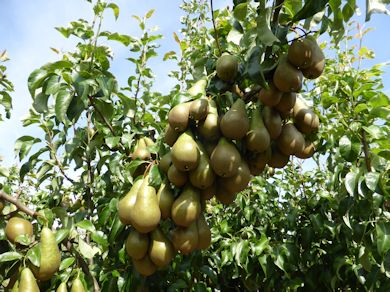 The English Braeburn crop this year is heavy and of very good quality, unfortunately 'sporadic' hail damage can be enough to 'downgrade' the final marks. 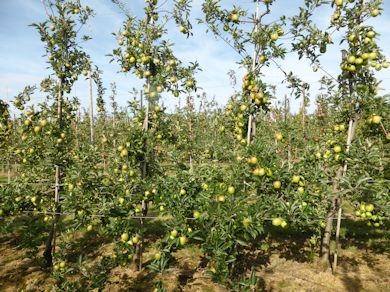 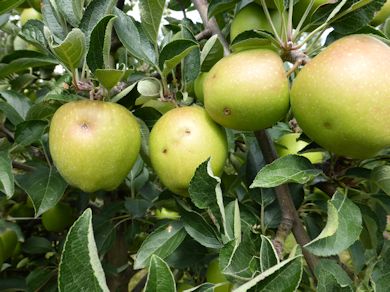 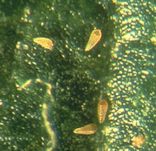 English Conference Pears are 'generally' very good this year with good yields and excellent quality. It only takes a small proportion with 'Rough Russet' and 'evidence of pest & disease' to separate 1st from 3rd place!

Rough russet is generally caused by cold weather at the 'delicate' early fruitlet stage. Pear blister mite looks worse than it is; the miniscule mites feed by sucking sap from the leaf cells and while doing so, secrete chemicals that create small discoloured blisters or blotches around where the mites are feeding on the new leaves, which gradually turn blackish-brown. Although the mites breed prolifically, producing several generations over summer, the productivity of the tree isn't usually affected.

The mites overwinter underneath the outer bud scales on pear trees; in spring the mites emerge and penetrate into the developing foliage. The mites spend the summer feeding and breeding inside the leaves but come out and seek overwintering sites before leaf fall. 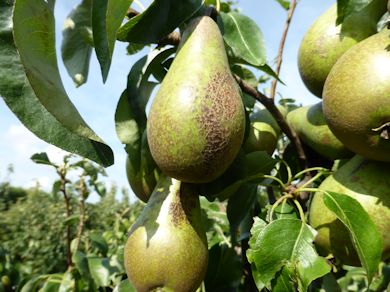 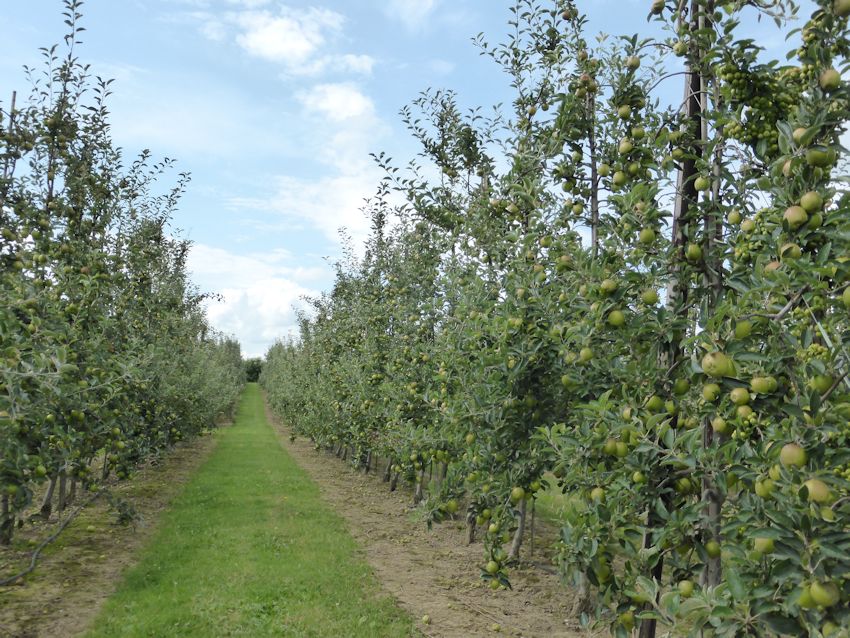 Simon Bray is a regular on the 'podium' at orchard competitions in Kent, and his Bramley (Boyce orchard) won the Culinary Class with a score of 97/100 points. 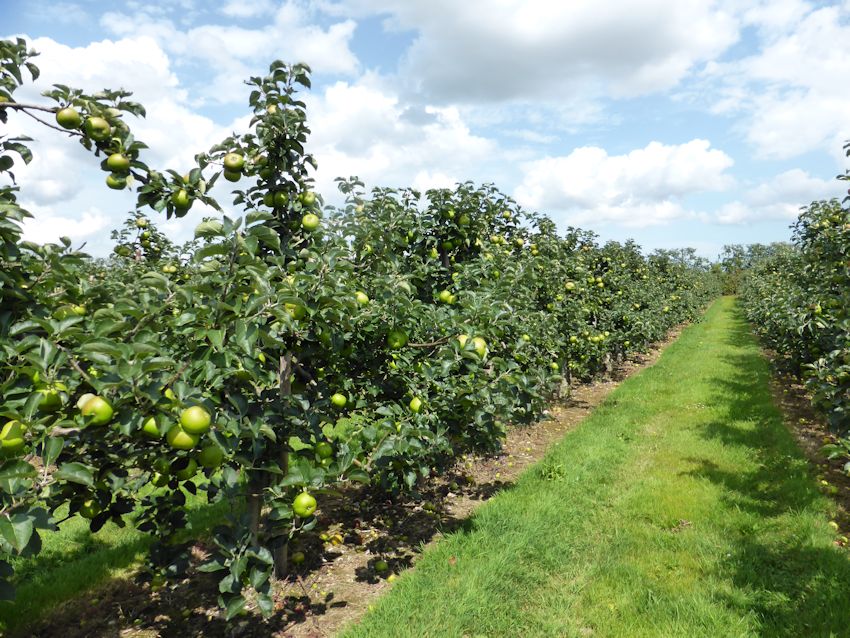 Henry Bryant's Bramley (Pond orchard) finished 3rd in the Culinary Class; equal points to the winner for crop but hail damage and a point less for P&D enough to finish just 4 points behind the winner. 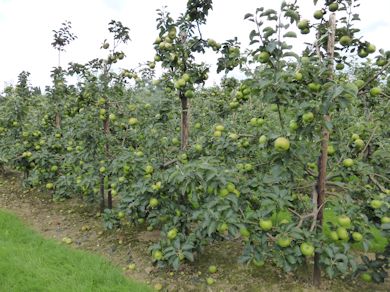 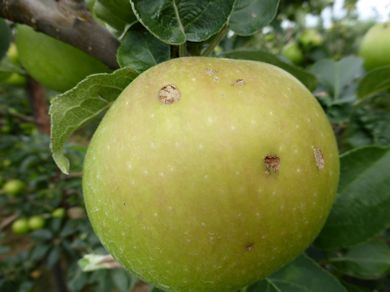 Robert Hinge must consider himself unlucky, finishing 2nd in the Pear and Dessert Classes; his Bayford Conference just one point behind David Long's Castle Orchard (95/100 v 96/100) in the Pear class and 95/100 for his Gala/Braeburn/Amelia Churchfield Orchard; just one point below Clive Goatham's Rubens Orchard at Gore Farm (96/100)

Of particular interest to The English Apple Man, Robert has a small orchard of Bambinella Pears and regular readers of the EAM Journal will be aware of my interest/involvement. This was my first visit to this orchard and the pictures below show Robert in his Bambinella orchard and a 'close up' of the Bambinella fruit.

Bambinella grows to between 35 - 40mm in size and is a very sweet specialist pear ideal for 'snacking' in the same way as cherries.

Below left; Robert Hinge in his Bambinella Orchard - Below right; a 'close up' of Bambinella 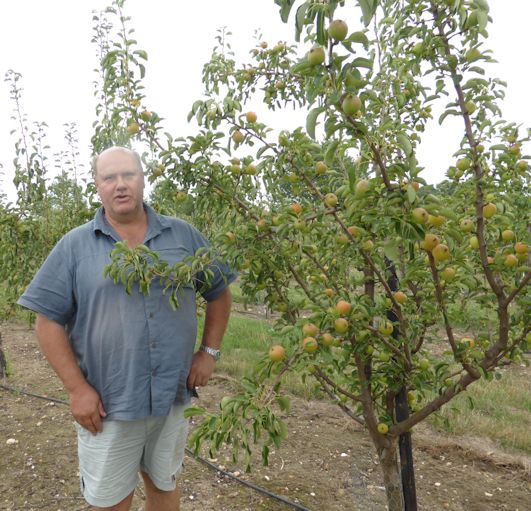 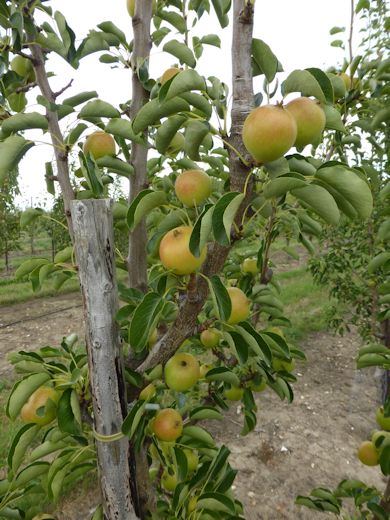 Bambinella is synonymous with Malta; possibly not truly 'indigenous' but certainly resident there for a thousand years, or more; click to view Maltese Bambinella Story

On Wednesday, The English Apple Man joined a large group of growers and industry representatives at Park Farm Frittenden for a celebratory farm walk and the presentation of trophies.

As one of the judges, The English Apple Man shared a responsibility for separating the various farms in the competition. In 'tandem' with fellow judge Nigel Jenner we had patrolled the orchards at Park Farm inspecting in great detail the various parameters on our score sheets. It is always comforting to return a few weeks after the 'day of judgment' and receive the endorsement of those attending the farm walk.

With the weather a little more unsettled over the last week, and showers in the region during the day, we were blessed with a fine evening at Park Farm.

Park Farm is a very attractive setting, with views of the North Downs in the distance; on the horizon Coxheath (left) across to Sutton Valence (right) 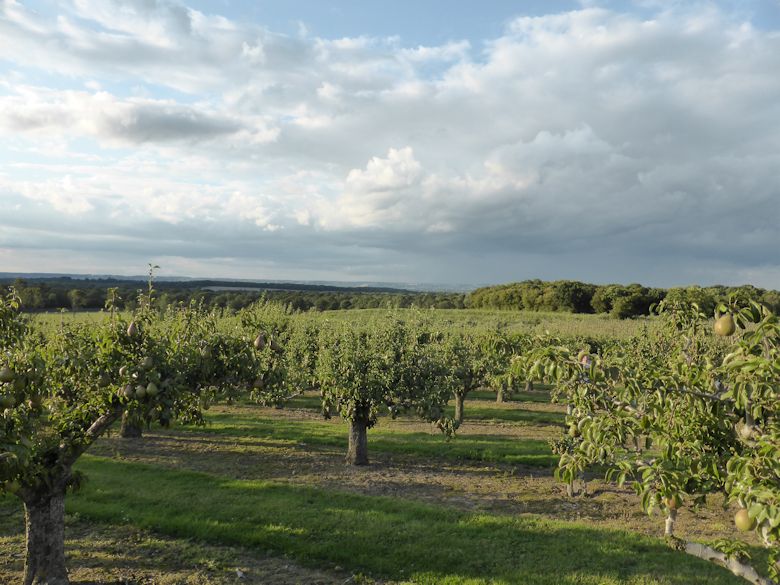 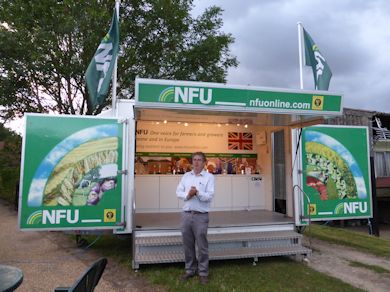 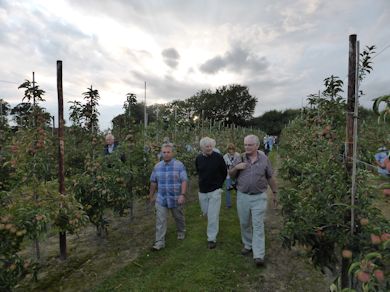 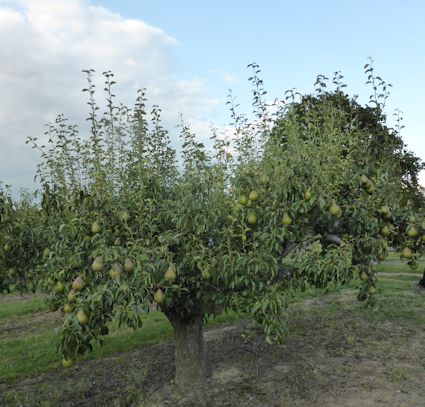 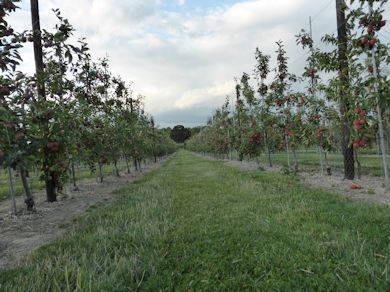 Park Farm has been in the same family since the Honess family bought it in 1930 farming there until 1959 when their nephew Pat Tompsett took over and subsequently bought it in 1962. Pat owned the farm up until 2005 when James & Laura Hasell bought the farm. James is John Honess's Grandson, so Park Farm has remained in the same family for nearly 85 years.

Jonathan Duke was born in a cottage close to the farm and first worked for Pat Thompsett straight after school. He then studied fruit at Hadlow College before working for Pat and subsequently James ever since.

James bought an additional 30 acres in 2008 increasing the land area of the farm to 90 acres. Currently there is 54 acres of Top Fruit compromising 18 acres of Pears, 19 acres of Bramley and 17 acres of Dessert Apples. All the fruit from Park Farm is marketed by A.C.Goatham & Sons - an arrangement that has continued for the last 11 years.

Embracing dessert varieties, Jonathan planted 5 acres of Gala Schniga on M9 in 2011 and with the marketing arrangement with A.C.Goatham (license holders for Zari) planted 8.5 acres of ZARI in 2009 and a further 1.5 acres in 2011.

The orchard planted in 2011 (Foxearth New) won the Young Orchard Award with 99/100 points. 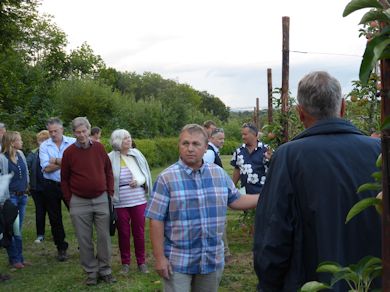 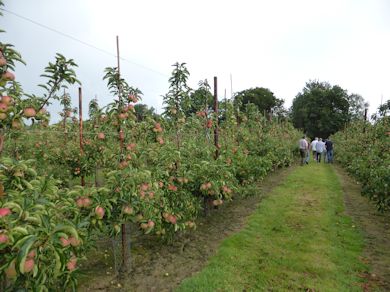 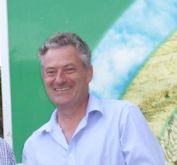 Following a walk around Jonathan's award winning orchards, it was time to present the category winners with their Trophies. Before the 'main event' Martin Webber introduced Andy Sadler - CEO of Norman Collett the main sponsor for the evening and after a few words form Andy on the prospects for the coming season, Martin introduced William White - Regional Director at NFU South East who gave us an overview on areas of importance NFU are involved in on behalf of NFU grower members. 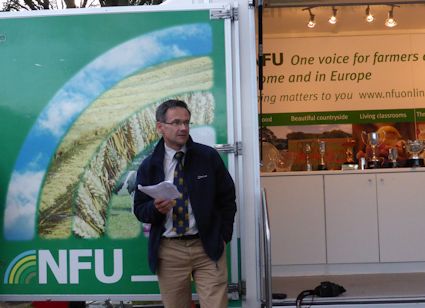 In last week's English Apple Man Journal the narrow margins between winners, runners up and third place were reported; in fact the 'fine margins' were prevalent throughout the competition. Due to the number of trophies generously awarded by supporters of the Goudhurst & Paddock Wood competition, there is a more than decent chance of not going home 'empty handed' but equally the highest scoring orchard/farms/categories will win more than one trophy each!

The Duke and Hasell families with their trophies 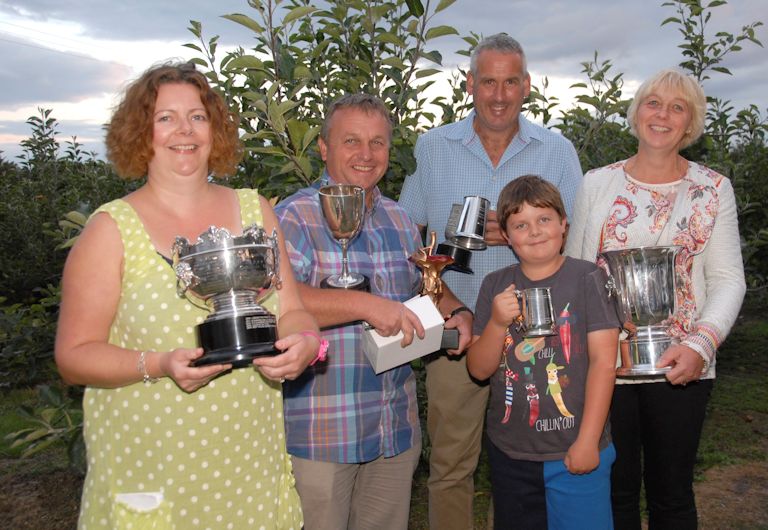 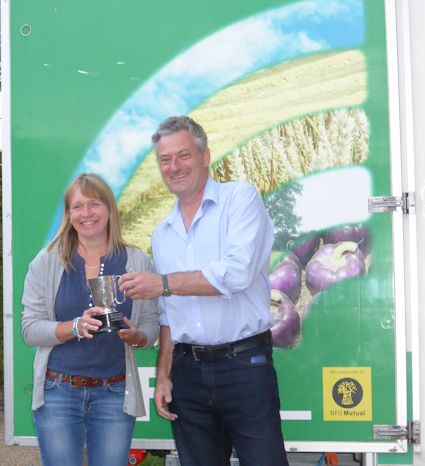 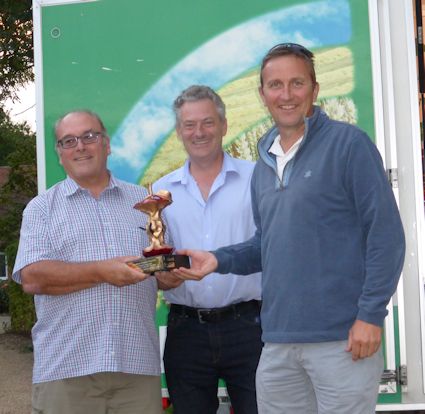 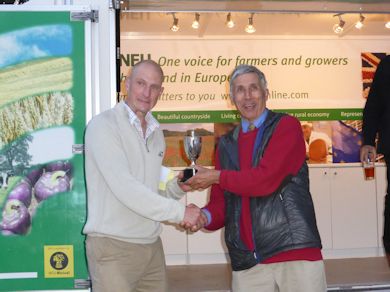 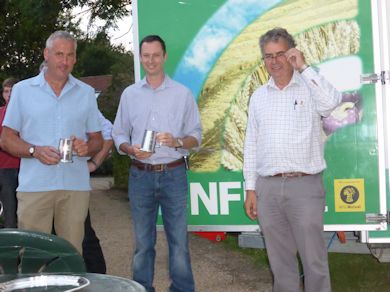 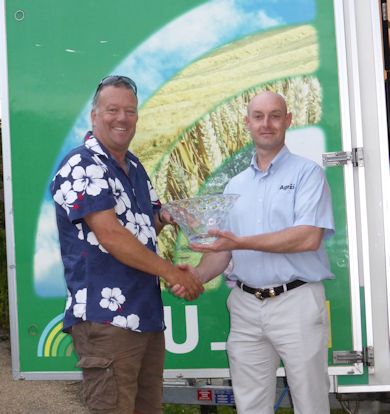 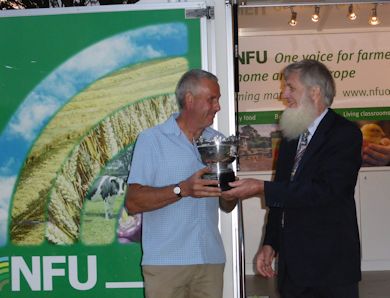